You are here: Home / Archives for Faith

What makes you happy… a voice is heard from afar asking this question. Laughter, smiles and little voices yelling mommy begin circling all around my head. An immediate smile comes to my face. Two precious girls fill my soul with happiness.

Then I look around the room and I see my handsome husband looking at me with those eyes when we first met. My heart is immediately filled with happiness.

Then the Lord wraps his arms around me and I remember, he gave me this precious family. He is the ultimate reason that I am happy. Lord I lay my life before you, I need, I want to be closer to you. My heart wants to be bursting at the seams with your gospel. I need your heart confidence Lord and I soon will be diving into this book that will continue my happiness. New online bible study starting this fall by Proverbs 31 Ministries and I cannot wait! 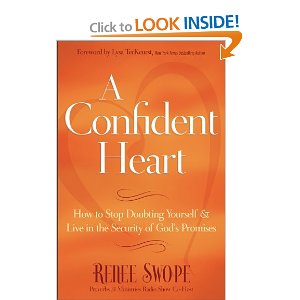 What makes you happy?

Scotty McCreery is our hometown boy here in the Triangle of NC, but that is not the reason that he has my votes. He has each week thanked God for getting him through every single day in Hollywood but this past week he showed his faith even further. 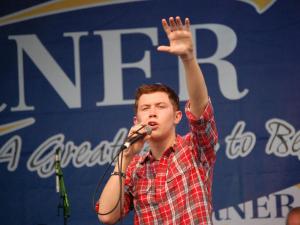 “I also withheld rain from you when the harvest was still three months away. I sent rain on one town, but withheld it from another. One field had rain; another had none and dried up.”

Do you know that the rain went all around Garner, NC and did not once sprinkle through the homecoming parade and the homecoming concert? God is Amazing. We were on the opposite side of Garner, NC in another town for M’s softball game. At one point, everyone actually had to seek shelter because of the storms. Finally after the thunder and lightning stopped, we were back in action. Unfortunately, the rain decided to pour heavily. M and hubby got soaked on the field, while L and I were hiding under an umbrella. So needless to say, God was watching out for Scotty and everyone else as there were approximately 30,000 people on hand at the concert.

I believe with all my heart that God is blessing Scotty and giving him the power to be such a positive influence in the music industry that we so deseparately need. For everyone that watched the show last Wednesday night, you seen how Scotty once again stood up for his faith and Christ Lord Jesus. Lady GaGa was the mentor for the week and had some very weird advice for Scotty. Such as treat the microphone as his girlfriend, act like your are sticking your tongue down the microphone and etc. Upsetting is a huge understatement as luckily M was in the bedroom at the time this was going on, as we try to limit what the girls see on tv. Fox crossed the lines of letting this go on a family tv show. Scotty could have given into peer pressure but yet, he stands up and kisses his cross around his neck thanking the Lord for being with him to get him through these tough moments in Hollywood.

The music industry is getting out of hand and it is very unfortunate, as music can be so inspirational and powerful without all the bad language. Thank you Scotty for standing up for what you believe in and having God with you every moment in your life. He ended his homecoming by saying that he loved all his fans and so thankful for them and God. AMEN!

The royal law which is known today as the Golden Rule – Do unto others as you would have them do unto you still needs to be practiced today and we had a long discussion about it tonight with M and L before bedtime. 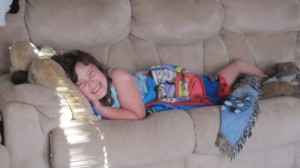 Unfortunately, an incident happened at school. A little boy told M she was fat. Seriously, we do not even need to go there at this age and I was so bummed that M had to hear those ugly words. You may think that I immediately put the little boy down, but that is the opposite of what happened. M, said “mom the golden rule says I need to be kind to bullies so they will realize how I want to be treated.” This speaks volume folks. Instead of M feeling mad towards the boy, she said mommy I still like B.

I was crying on the inside and called M’s teacher. Here my precious sweet M is being such a kind soul about the whole situation by mama bear was coming out a little. The teacher was amazing and handled it beautifully, with the little boy apologizing and feeling really bad. It came down to the little boy was upset M was friends with another boy, so he let evil words slip out of his mouth. Parents this is why, we need to remember to instill the golden rule into their minds as soon as they are at the age they can understand.

Just imagine if every child lived by the golden rule? This world would be in such a better place. It is such a simple rule but yet one that is so deep and can leave such an effect on a child. L said: “Mommy, I want to be nice to all my friends so they will be nice to me back.” Absolutely, and even as adults, we need to remember this simple, yet amazing rule!

So, have you taught your child about the Golden Rule?

VeggieTales has released a whole new website at VeggieTales.com. It is no secret that our family are HUGE fans of VeggieTales. I have written lots of posts here about how my love of VeggieTales runs over to the girls and I could not be happier. The stories and the characters helps guide me to raise the girls in such an awesome Christian environment home.

We learned this week of the new website release, I immediately let the girls log onto the site once they came home from school. I wanted them to play around on the site for a couple days before I posted about it here on One Moms World. We could not be more happier with the site. The girls each have their favorite parts on the site. 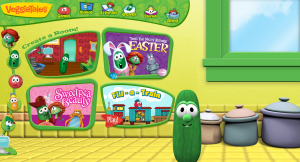 Activities – She loves to print out different pages each day to work on as her “homework” she says. She gets so jealous that she doesn’t have homework and M does, so this is her way of connecting with her sister during homework time.

Videos – L is all about the videos on the page. She will play them with the volume turned all the way to the top. She can be so serious watching and then she will be up dancing around. So cute!

Stories – M loves to read books as I have mentioned before. She will sit at the computer and spend so much time reading the different stories. What I love is that, M can either push the option to have the story read to her or her read their story on her own. Brillant!

Games – M has enjoyed playing the games for a bit of down-time before bed. I love that the games can be fun but also a teaching mechanism of God’s word.

So many sites online have got away from the family message that I like the girls to see, so I am forever grateful to VeggieTales for coming out with this modern site that continues on it’s goodwill message of christian guidance. Another big plus that I heard from VeggieTales “We will offer daily Bible verses called the “Daily Word” and short devotionals for kids hosted by QWERTY the computer character found in the countertop scenes of each VeggieTales show. We are really hoping that parents will find this to be a safe and endlessly fun place for kids to go online to play and learn, as well as to grow their faith.”

Disclosure: I have a working relationship with VeggieTales but this in no way changes my opinions or thoughts. All words are of my own and from my heart!

I am writing about our faith today.

Yet, I wasn’t sure how to get those messages across to them. I wanted to feel like I was doing a good job, but in my heart I knew that more needed to be done. I entered a local Christian Book Store and right there at the table at the front door was a devotion book for little girls by Veggie Tales. God knew what he was doing by leading me into the store at that given time. We started this book in the New Year and we do it every single night before bedtime. It is just the girls and I all snuggled in the bed and reading the day’s devotion. The devotion is spread out into 365 days so you do a devotion a day. The devotions are so easy to understand and comprehend that it is opening up so many conversations between the girls and I. Not only are they learning more about God and his awesomeness for us, but I am learning too.

The devotions are broken into a bible verse, a devotion about the bible verse and then a bedtime prayer. It teaches about the golden rule, friendships, honesty, and etc. I am setting stones hopefully in their life now that will lead them into a lifetime of calling unto our almighty God everyday to guide them. God is powerful and not only do the girls need to remember and get closer to God but their mommy does as well.

Thank you Lord for putting this great devotion book in front of my eyes.

You amaze me with your powers. We are growing closer to you and it feels so good!